SOA formation from ethylene ozonolysis in the presence of NaCl 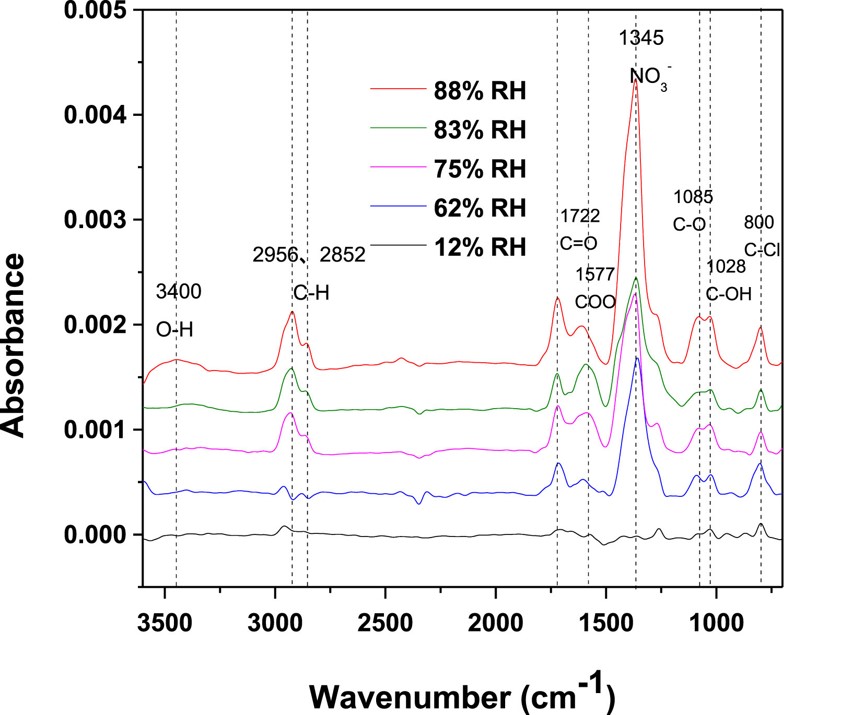 Abstract:Secondary organic aerosol (SOA) formation from the gas-phase ozonolysis of ethylene without irradiation was studied at different levels of relative humidity (RH) in both absence and presence of sodium chloride (NaCl) in a Teflon bag reactor. Results show that a small amount of SOA was formed from the ethylene ozonolysis in the absence of NaCl. When NaCl was in the form of liquid droplets, much more SOA could be formed. With the initial concentrations of 1 ppm and 0.5 ppm for ethylene and ozone, SOA concentrations of 3.0 to 8.6 μg/m3 were obtained after 5-h reactions under RH levels of 62% to 88% in the presence of NaCl seed particles, which were about 3~9 times higher than the results from the experiments without NaCl. The yield of SOA also increased with increasing RH, with the value being 3.0% at 88% RH in the presence of NaCl. Addition of the scavenger of OH radicals (n-hexane, ~900ppm) into the reaction system at 86% RH resulted in the decrease of the SOA yield by 21%. The liquid water content in aerosols was a key factor to SOA formation in the presence of different seed particles, including NaCl and Na2SO4. An analysis of the SOA with a Fourier-transform (FT) IR spectrometer shows that the particles formed from the ethylene ozonolysis were organic compounds that contained the functional groups of O–H, C=O, C–O, C–Cl and C–OH. The heterogeneous aqueous reaction is probably an effective pathway to form SOA from the ethylene ozonolysis, which should be considered in the atmosphere.